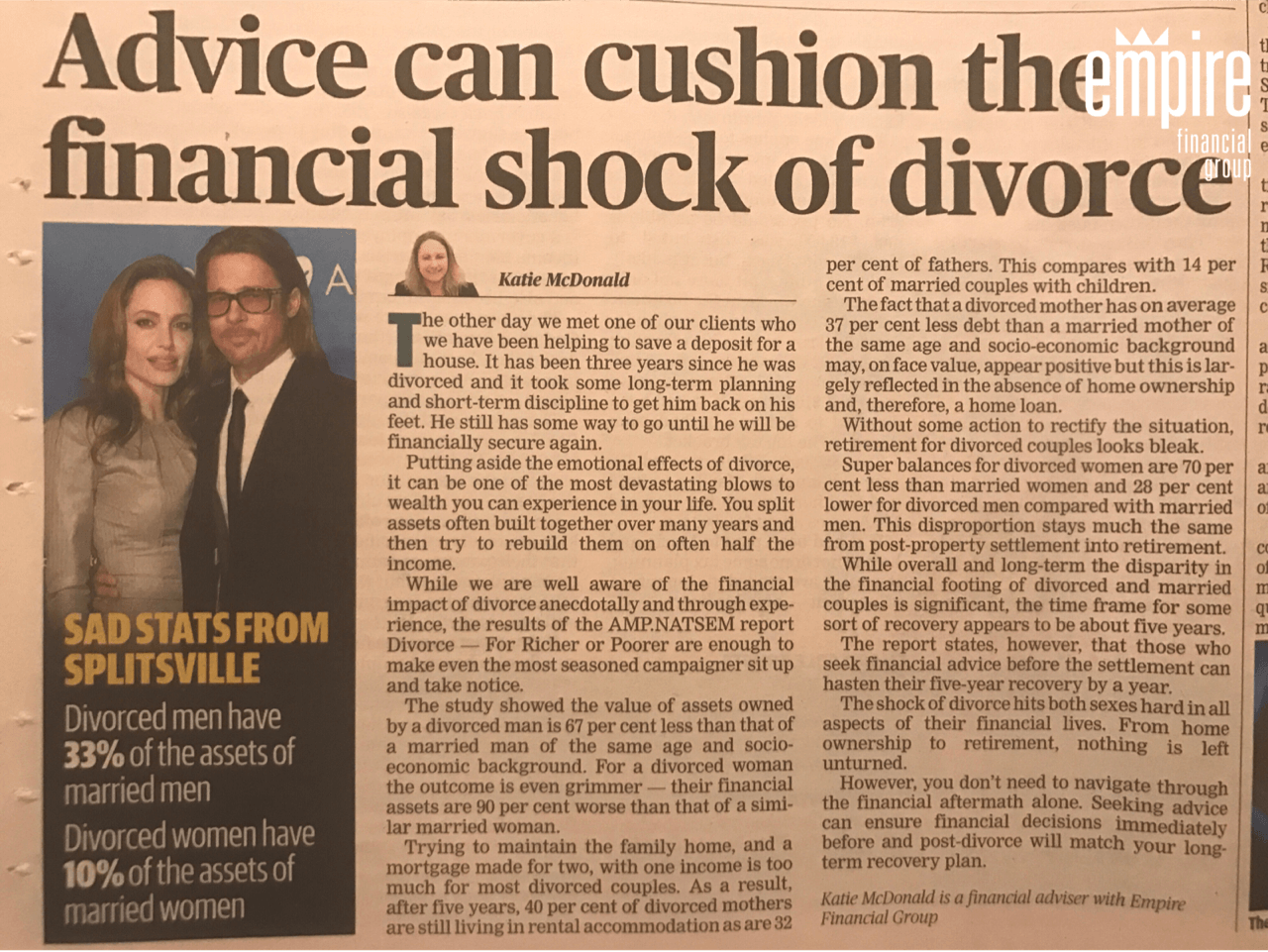 The other day, we met one of our clients who we have been helping to save a deposit for a new house purchase. It had been three years since he was divorced and it took some long term planning and short term discipline to get him back on his feet. He still has some way to go until he will be financially secure again.

Putting aside the emotional effect of divorce, financially speaking, it can be one of the most devastating blows to wealth one can experience in their lifetime. You are splitting assets often built together over many years, and then trying to rebuild them on often half the income.

While we were well aware of the financial impact of divorce anecdotally and through experience, the results of the AMP.NATSEM report “Divorce – For Richer or Poorer” were enough to make even the most seasoned campaigner sit up and take notice.

Overall, the study showed the value of assets owned by a divorced man is 67% less than compared to that of a married man of the same age and socio-economic background. For a divorced woman the outcome is even grimmer – their financial assets are 90% worse than that of similar married women.
Trying to maintain the family home, and a mortgage made for two, with only one income is too much for most divorced couples. As a result after five years, 40% of divorced mothers are still living in rental accommodation as are 32% of fathers. This compares with only 14% of married couples with children. The fact that a divorced mother has on average 37% less debt than a married mother of the same age and socio-economic background may on face value appear to be a positive, but this is largely reflected in the absence of home ownership, and therefore home loans.
Unfortunately, without some action to rectify the situation, retirement for divorced couples looks bleak, as super balances for divorced women are 70% less than married women, and 28% lower for divorced men compared with married men. This disproportion stays largely the same from post property settlement into retirement years.
While overall and long term the disparity in the financial footing of divorced and married couples is significant, the time frame for some sort of recovery appears to be approximately 5 years. The report however states that those seeking financial advice prior to the settlement can have their 5 year recover hastened by a year, or 20% better off.

Overall the financial shock of divorce hits both sexes hard in all aspects of their financial lives, from home ownership to retirement – nothing is left unturned.

However, you don’t need to navigate through the financial aftermath alone. Seeking advice can ensure the financial decisions immediately prior and post divorce match your long term recovery plan.