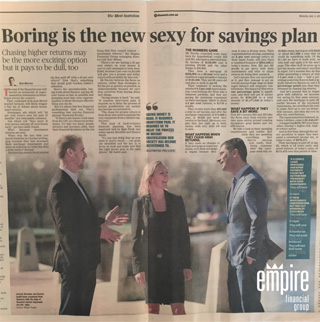 
Simple is the new sexy for saving plan

The end of the financial year will herald an avalanche of superannuation statements in letterboxes across the country.

That, combined with post-Brexit market turmoil, will likely trigger a fair bit of debate about investment returns. Newspaper ads which yell “20 per cent return over the past 12 months” are reasonably common. Ads which yell “Save more of your money and pay off your house early” are less easily found.

Because investment returns are sexy. When was the last time you heard someone at a barbecue bragging because they had increased their mortgage repayments and were on schedule to retire the debt a little earlier? Boring! But hearing about a stock market tip that paid off with a 50 per cent return? Now that’s something that would grab Gordon Gekko’s attention.

Here’s the uncomfortable, boring truth about finance: paying off your house as fast as possible and pumping more into your superannuation is about the most effective thing you can do. But it’s advice that few financial professionals dish out.

That’s something that worries financial planner Raymond Pecotic. “If there’s one lesson I took away from the GFC as a financial professional, it’s that too many people, advisers and investors alike, base their financial decisions on the one
thing that they cannot control — investment returns,” the Empire Financial Group managing director told Your Money. “There’s no use having a 20 per cent return on your money if you’ve only managed to tuck away $1000, because 5 per cent on $10,000 will give you a greater end dollar return with probably far less risk.”

Mr Pecotic believes the focus on returns, rather than strategies to fill the pot as quickly as possible, is understandable because we can’t stop ourselves from buying shiny new things.

“Saving money is hard,” he said. “It requires short-term pain. It requires us to delay the process of instant gratification our society has become accustomed to.”

“The chase for greater return is from those who need to squeeze the very maximum from a limited capital pool.”

That kind of back-to-basics financial planning has been employed well by East Perth real estate agents Brendan and Sharon Smith.

“It’s one less thing that we now need to worry about — our goals are identified and the key is to focus on work and make sure that the right money goes to the right places,” Mr Smith said.

Their employer is making the standard 9.5 per cent superannuation contributions for them into a balanced portfolio, and they are paying the minimum repayment on their mortgage, which at around 4.5 per cent interest, is $1770 a month.

They receive more than $95,000 a year in net income, and after the mortgage repayment, of $74,000 a year, or $1423 per week they receive in the hand, like many couples they live right up to their means, with very little left over to save.

WHAT HAPPENS WHEN THEY CHASE HIGH RETURNS:

Their superannuation savings, assuming an 8 per cent average return on their super funds will give them a combined balance of $983,588 in today’s money.

Now, Bill and Jill decide to get savvy with their investments and start to chase returns by doing their research. Let’s assume they are successful at it, and they manage to get an overall average 9 per cent on their super balance and employer contributions. The impact of that extra one percentage point is significant, and their end pot of money grows by $194,252 to a total amount of $1,177,840 in today’s money.

WHAT HAPPENS IF THEY SAVE A BIT MORE:

Now let’s assume Bill and Jill take the focus away from returns and take some advice around creating disciplines, good habits, and tax efficiencies. We take a look at their spending requirements and realise that while they are spending everything that they’re earning now, really, their living expenses after the mortgage need only be $1200 a week, leaving us with $223, or about $11,500 a year that we could do something with.

Of the $11,500 we have to work with, we take half and apply it to the mortgage. The other half we gross up to pre-tax money and salary sacrifice to super. Let’s assume they do this while generating a return of only 7.5 per cent a year — half a percentage point less than we had originally based our figures on, and 1.5 percentage points less than they obtained by chasing big returns. And let’s assume that as wages grow with inflation, we increase our saving by that same amount, and once the mortgage is paid off earlier because of the increased repayments, we contribute the rest to super, first up to our tax deductible amount, and then the rest as after-tax contributions. The superannuation balances, in today’s dollars come to $1,648,637 — a staggering $470,797 more than when chasing a higher-risk, higher-return option. And in that time, through the salary sacrifices to super have saved a combined income tax, at today’s rates, of $276,271. Their mortgage is paid off at age 53, which is 12 years early, and saving interest, at today’s rates, of $115,472 over that period of time.