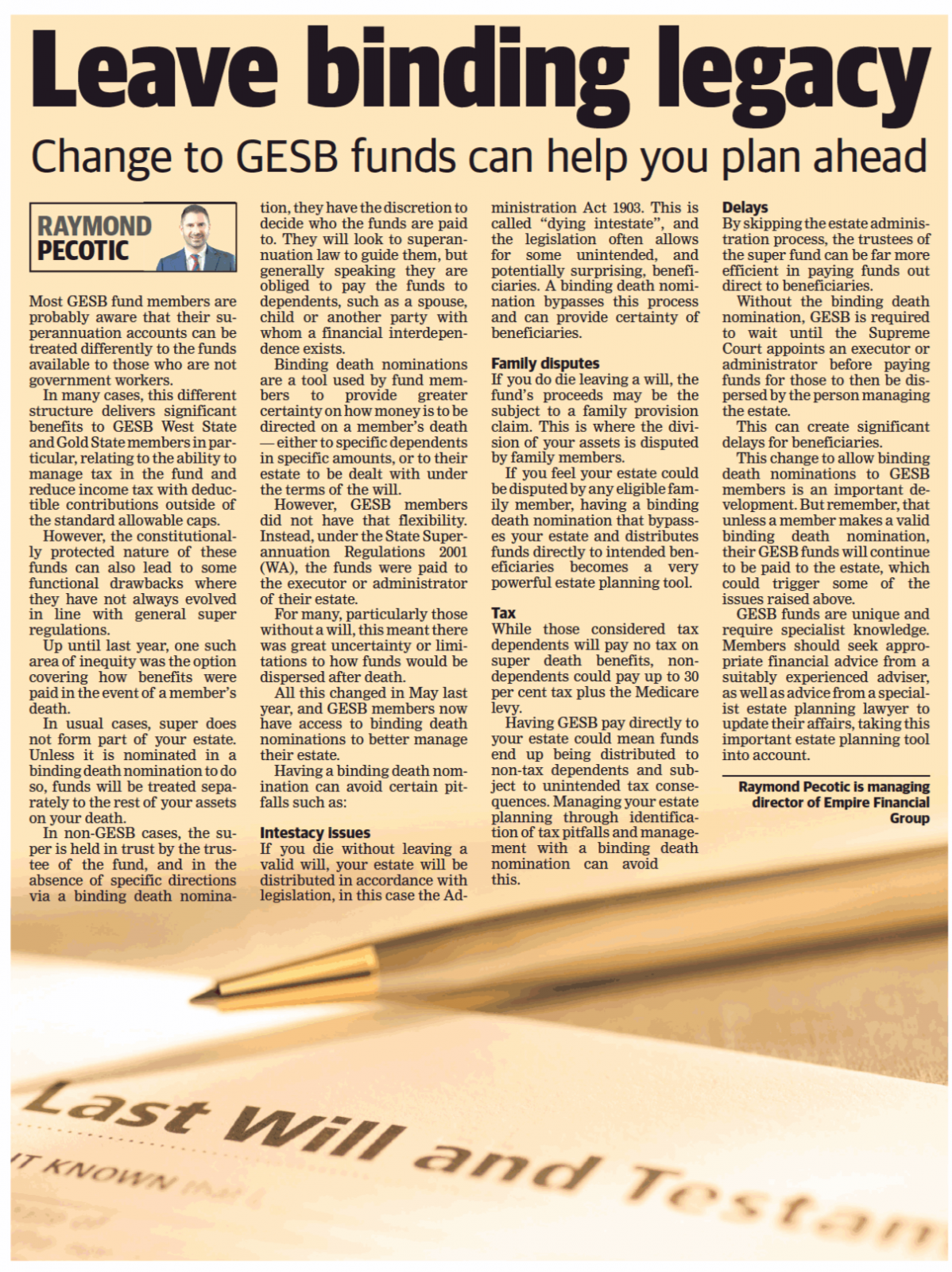 (This article was first published in The West Australian, Your Money, 18 April 2022)

Most GESB fund members are probably aware that their superannuation accounts can be treated differently to the funds available to those who are not government workers.

In many cases, this different structure delivers significant benefits to GESB West State and Gold State members in particular, relating to the ability to manage tax in the fund and reduce income tax with deductible contributions outside of the standard allowable caps.

However, the constitutionally protected nature of these funds can also lead to some functional drawbacks where they have not always evolved in line with general super regulations.

Up until last year, one such area of inequity was the option covering how benefits were paid in the event of a member’s death.

In usual cases, super does not form part of your estate. Unless it is nominated in a binding death nomination to do so, funds will be treated separately to the rest of your assets on your death.

In non-GESB cases, the super is held in trust by the trustee of the fund, and in the absence of specific directions via a binding death nomination, they have the discretion to decide who the funds are paid to. They will look to superannuation law to guide them, but generally speaking they are obliged to pay the funds to dependents, such as a spouse, child or another party with whom a financial interdependence exists.

Binding death nominations are a tool used by fund members to provide greater certainty on how money is to be directed on a member’s death either to specific dependents in specific amounts, or to their estate to be dealt with under the terms of the will.

However, GESB members did not have that flexibility. Instead, under the State Superannuation Regulations 2001 (WA), the funds were paid to the executor or administrator of their estate.

For many, particularly those without a will, this meant there was great uncertainty or limitations to how funds would be dispersed after death.

All this changed in May last year, and GESB members now have access to binding death nominations to better manage their estate.

Having a binding death nomination can avoid certain pitfalls such as:

If you die without leaving a valid will, your estate will be distributed in accordance with legislation, in this case the Administration Act 1903. This is called “dying intestate”, and the legislation often allows for some unintended, and potentially surprising, beneficiaries. A binding death nomination bypasses this process and can provide certainty of beneficiaries.

If you do die leaving a will, the fund’s proceeds may be the subject to a family provision claim. This is where the division of your assets is disputed by family members.

If you feel your estate could be disputed by any eligible family member, having a binding death nomination that bypasses your estate and distributes funds directly to intended beneficiaries becomes a very powerful estate planning tool.

While those considered tax dependents will pay no tax on super death benefits, nondependents could pay up to 30 per cent tax plus the Medicare levy.

Having GESB pay directly to your estate could mean funds end up being distributed to non-tax dependents and subject to unintended tax consequences. Managing your estate planning through identification of tax pitfalls and management with a binding death nomination can avoid

By skipping the estate administration process, the trustees of the super fund can be far more efficient in paying funds out direct to beneficiaries.

Without the binding death nomination, GESB is required to wait until the Supreme Court appoints an executor or administrator before paying funds for those to then be dispersed by the person managing the estate.

This can create significant delays for beneficiaries.