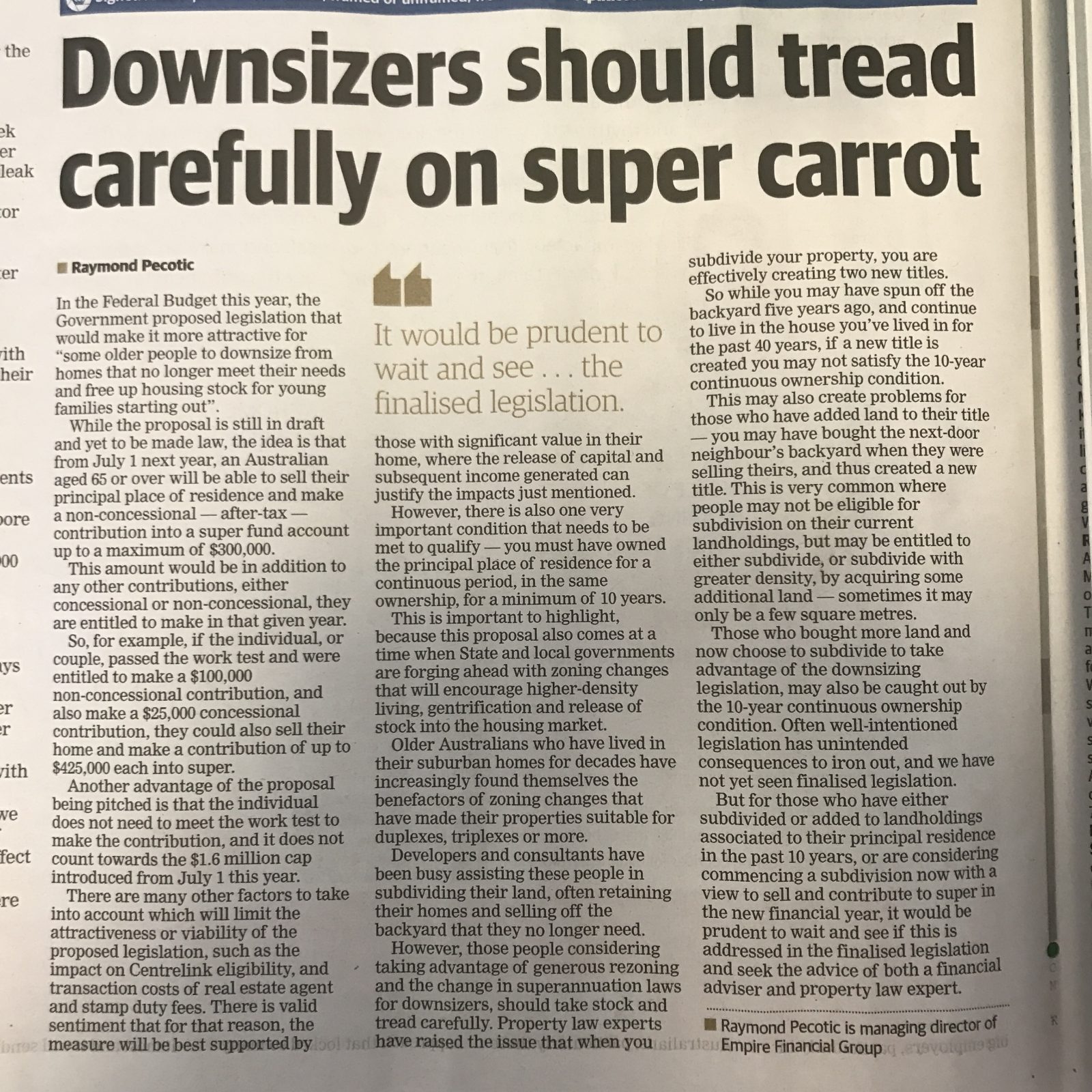 In the last Federal Budget, the government proposed legislation that would make it more attractive for “some older people to downsize from homes that no longer meet their needs and free up housing stock for young families starting out”.

While the proposal is still in draft and yet to be made law, the idea is that from 1 July 2018, an Australian aged 65 years or over will be able to sell their Principal Place of Residence and make a non-concessional (after-tax) contribution into a super fund account up to a maximum of $300,000.

Another advantage of the proposal being pitched is that the individual does not need to meet the work test to make the contribution, and it does not count towards the $1.6m cap also introduced from 1 July 2017.

There are many other factors to take into account which will limit the attractiveness or viability of the proposed legislation, like the impact on Centrelink eligibility, and transaction costs of real estate agent and stamp duty fees. There is therefore very valid sentiment that for that reason, the measure will be best supported by those with significant value in their home, where the release of capital and subsequent income generated can justify the impacts just mentioned.

However, there is also one very important condition that needs to be met to qualify – you must have owned the Principal Place of Residence for a continuous period, in the same ownership, for a minimum of 10 years.

This is important to highlight, because this proposal also comes at a time when State and Local governments are forging ahead to zoning changes that will encourage higher density living, gentrification and release of stock into the housing market.

Older Australians, who have been living in their suburban homes for decades, have increasingly found themselves the benefactors of zoning changes that have made their properties suitable for duplexes, triplexes or more.

Developers and consultants have been busy assisting these people in subdividing their land, often retaining their homes and selling off the backyard that they no longer need.

However, those considering taking advantage of both generous rezoning, and the change in superannuation laws for downsizers, should take stock and tread carefully. Property law experts have raised the issue that when you subdivide your property, you are effectively creating two new titles.

So while you may have spun off the backyard 5 years ago, and continue to live in the house you’ve lived in for the last 40 years, if a new title is created you may not satisfy the 10 year continuous ownership condition.

This may also create problems for those who have added land to their title – you may have bought the next door neighbour’s backyard when they were selling theirs, and thus created a new title. This is very common where people may not be eligible for subdivision on their current land holdings, but may be entitled to either subdivide, or subdivide with greater density by acquiring some additional land (sometimes it may only be the case of a few square metres).

Those who bought more land and now choose to subdivide to take advantage of the downsizing legislation, may also be caught out by this 10 year continuous ownership condition.

Often well intentioned legislation has unindented consequences to iron out, and we have not yet seen finalised legislation.
But for those who have either subdivided or added to land holdings associated to their Principal Residence in the last 10 years, or are considering commencing a subdivision now with a view to sell and contribute to super in the new financial year, it would be prudent to wait and see if this is addressed in the finalised legislation and seek the advice of both a financial adviser and property law expert.