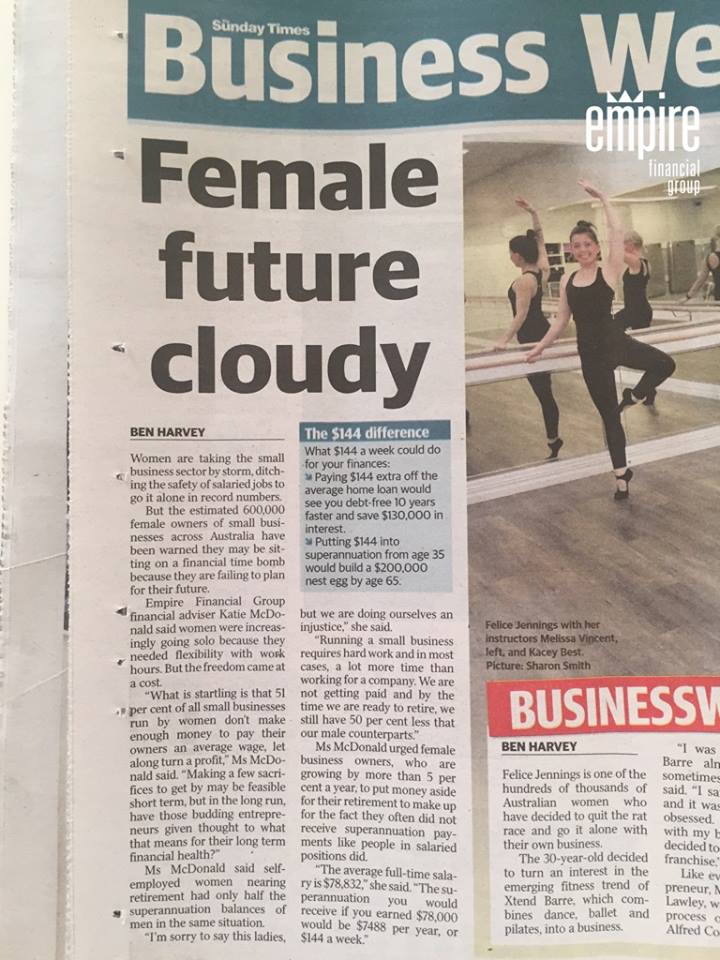 Women are taking the small business sector by storm, ditching the safety of salaried jobs to go it alone in record numbers. But the estimated 600,000 female owners of small businesses across Australia have been warned they may be sitting on a financial time bomb because they are failing to plan for their future.
Empire Financial Group financial adviser Katie McDonald said women were increasingly going solo because they needed flexibility with work hours. But the freedom came at a cost.

“What is startling is that 51 per cent of all small businesses run by women don’t make enough money to pay their owners an average wage, let along turn a profit, ” Ms McDonald said. “Making a few sacrifices to get by may be feasible short term, but in the long run, have those budding entrepreneurs given thought to what that means for their long term financial health?”

Ms McDonald said self-employed women nearing retirement had only half the superannuation balances of men in the same situation. “I’m sorry to say this ladies, but we are doing ourselves an injustice, ” she said. “Running a small business requires hard work and in most cases, a lot more time than working for a company. We are not getting paid and by the time we are ready to retire, we still have 50 per cent less that our male counterparts.”

Ms McDonald urged female business owners, who are growing by more than 5 per cent a year, to put money aside for their retirement to make up for the fact they often did not receive superannuation payments like people in salaried positions did. “The average full-time salary is $78,832, ” she said. “The superannuation you would receive if you earned $78,000 would be $7488 per year, or $144 a week.”