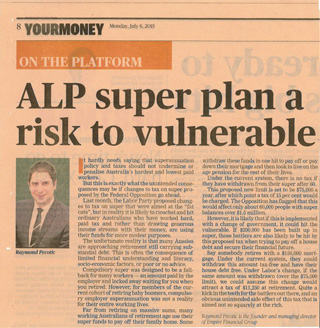 It hardly needs saying that superannuation policy and taxes should not undermine or penalise Australia’s hardest and lowest paid workers. But this is exactly what the unintended consequences may be if changes to tax on super proposed by the Federal Opposition go ahead.

Last month, the Federal Labor Party proposed changes to tax on super that were aimed at the “fat cats” but in reality it is likely to ricochet and hit ordinary Australians who have worked hard, paid tax and rather than drawing generous income streams with their money, are utilising their funds for more modest purposes.

The unfortunate reality is that many Aussies are approaching retirement still carrying substantial debt. This is often the consequence of limited financial understanding and literacy, socioeconomic factors, or poor or no advice.

Compulsory super was designed to be a fall back for many Aussies — an amount paid by the employer and locked away waiting for you when you retried. However, for members of the current cohort of retiring baby boomers, compulsory employer superannuation was not a reality for their entire working lives.

Far from retiring on massive sums, many working Australians of retirement age use their super funds to pay off their family home. Some withdraw these funds in one hit to pay off or pay down their mortgage and then look to live on the aged pension for the rest of their lives.

Under the current system there is no tax if they have withdrawn from their super after 60.

This proposed new limit is set to be $75,000 per annum, after which point a tax of 15 per cent would be charged. The Opposition has flagged that this would only affect about 60,000 people with balances over $1.5 million.

However, it is likely that if this is implemented with a change of government, it could hit the vulnerable. If $200,000 in super has been built up, those battlers are also likely to be hit by this proposed tax, when trying to pay off house debt and secure their financial future.

Say somebody retires with a $150,000 mortgage. Under the current system they could with- draw this amount tax-free and have their house debt free. Under Labor’s change, if the same amount was withdrawn (over the $75,000 limit), then we could assume this change would attract a tax of $11,250 at retirement. Quite a kick in the teeth for the battlers out there, and an obvious unintended side effect of this tax that is aimed not so squarely at the rich.’