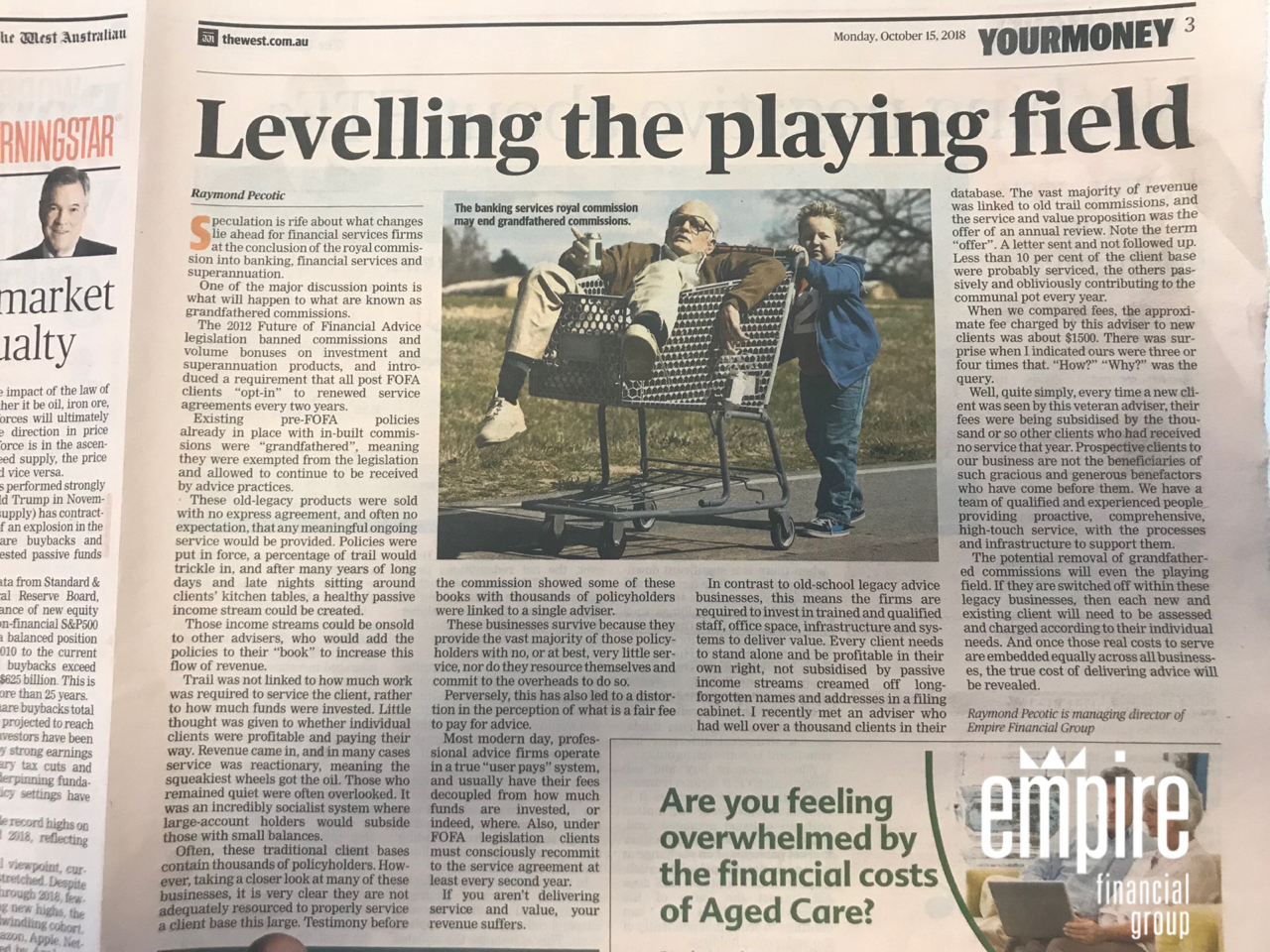 This article first appeared in the Your Money liftout of The West Australian, Monday 15 October 2018

Speculation is rife about what changes lie ahead for financial services firms at the conclusion of the Royal Commission into Banking, Financial Services and Superannuation.

One of the major discussion points is what will happen to what are known as Grandfathered Commissions.

The 2012 Future of Financial Advice (FoFA) legislation banned commissions and volume bonuses on investment and superannuation products, and introduced a requirement that all post FoFA clients “opt-in” to renewed service agreements every two years.

Existing pre-FOFA policies already in place with in built commissions were “grandfathered”, meaning they were exempted from the legislation and allowed to continue to be received by advice practices.

These old legacy products were sold with no express agreement, and often no expectation, that any meaningful ongoing service would be provided.  Policies were put in force, a percentage of trail would trickle in, and after many years of long days and late nights sitting around clients’ kitchen tables, a healthy passive income stream could be created.

Those income streams could be on sold to other advisers, who would add the policies to their “book” to increase this flow of revenue.

Trail was not linked to how much work was required to service the client, rather to how much funds were invested.  Little thought was given to whether individual clients were profitable and paying their way.  Revenue came in, and in many cases service was reactionary, meaning the squeakiest wheels got the oil.  Those who remained quiet were often overlooked.  It was an incredibly socialist system where large account holders would subside those with small balances.

These businesses survive because they provide the vast majority of those policy holders with no, or at best, very little service, nor do they resource themselves and commit to the overheads to do so.

Perversely, this has also led to a distortion in the perception of what is a fair fee to pay for advice.

Most modern day, professional advice firms operate in a true “user pays” system, and usually have their fees decoupled from how much funds are invested, or indeed, where. Furthermore, under FoFA legislation clients must consciously recommit to the service agreement at least every second year.  If you aren’t delivering service and value, your revenue suffers.

In contrast to old school legacy advice businesses, this means the firms are required to invest in trained and qualified staff, office space, infrastructure and systems to deliver value.  Every client needs to stand alone and be profitable in their own right, not subsidised by passive income streams creamed off long forgotten names and addresses in a filing cabinet.

I recently met with an adviser who had well over a thousand clients in their database.  The vast majority of revenue was linked to old trail commissions, and the service and value proposition was the offer of an annual review.  Note the term “offer”.  A letter sent, and not followed up.  Less than 10 percent of the client base were probably serviced, the others passively and obliviously contributing to the communal pot every year.

When we compared fees, the approximate fee charged by this adviser to new clients was around $1500.  There was surprise when I indicated ours were three of four times that.  “How?”  “Why?” was the query.

Well, quite simply, every time a new client was seen by this veteran adviser, their fees were being subsidised by the thousand or so other clients who had received no service that year.

Prospective clients to our business are not the beneficiaries of such gracious and generous benefactors who have come before them. We have a team of qualified and experienced people providing proactive, comprehensive, high touch service, with the processes and infrastructure to support them. All that comes at a cost, which is reflected in our fees.  It would be largely the same in most modern day professional advice firms.

The potential removal of grandfathered commissions will even the playing field.

If they are switched off within these legacy businesses, then each new and existing client will need to be assessed and charged according to their individual needs.

And once those real costs to serve are imbedded equally across all businesses, the true cost of delivering advice will be revealed.