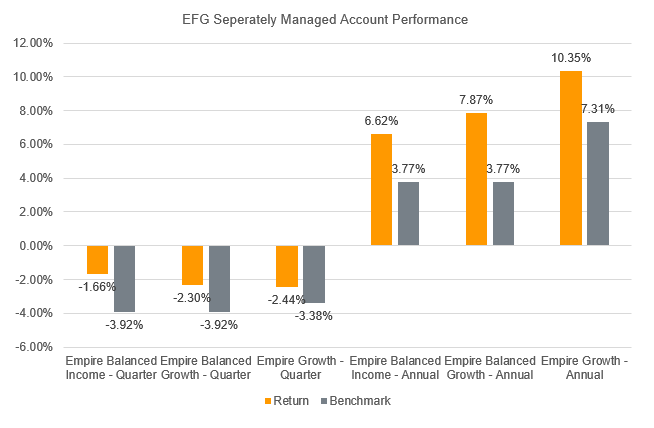 The ASX was a stand-out performer in the March quarter, with our commodity heavy index up 0.7%.  More broadly in equity markets:

Our client equity portfolio configurations generally have been positioned with a quality-growth bias as our view is this is the most suitable way to deliver long term consistent excess returns, with a value bias being a more transient and potentially capped return source.  This approach has generally weighed down on the performance of our client’s portfolio in the quarter, as T. Rowe Price and Aoris both meaningfully underperformed relative to their benchmarks. However our portfolios do have a meaningful home country bias which, in this case, has contributed to returns in the quarter as the Australian market outperformed most global markets due to commodity exposures.

As flagged in previous quarterly reviews, we have been concerned about the risk of rising interest rates and the potential impact on bond markets and resulting negative returns.

This risk eventuated in the first quarter of 2022 as:

These are not the returns to be expected of a ‘defensive’ asset and the earlier decision for our clients to have materially reduced duration exposure and reconfigured fixed income portfolios has added material value.

The most notable asset class in the March 2022 was commodities with Russia’s invasion of Ukraine amplifying existing concerns over inflation pressures as both the war and resulting sanctions on Russia impacting Oil, Gas and food markets given those nations’ role in the supply of these commodities. Notable rises include:

Whilst these rises were significant, in some cases the increases were even greater during the quarter.

For Empire Financial Group client portfolios, a stand-out performer was the alternatives allocation to Man AHL Alpha which delivered a return of +6.85% for the March quarter.

The US unemployment rate dropped from 3.8% in February to 3.6% in March. Australia’s is now 4.0%. A constrained labour market in economies like the US and Australia is putting upwards pressure on wages at the same time there is upwards pressure on prices from supply issues.  The annual US inflation rate, as measured by the consumer price index, hit 8.5% in March with Australia’s at 3.5% as of December 2021. Inflation and geopolitics are likely to have a significant impact on markets in the medium term. 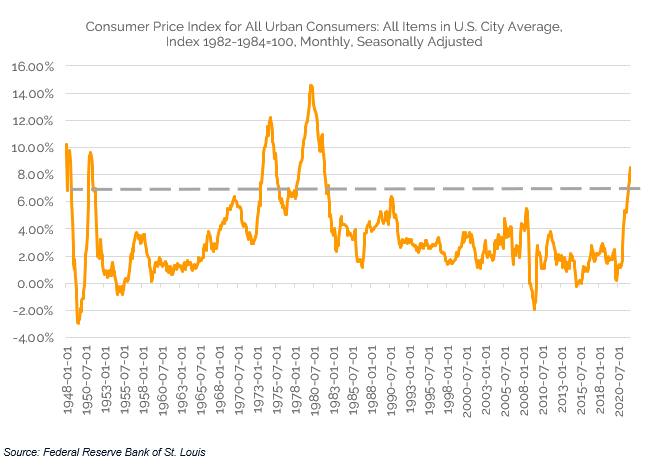 An acceleration towards decarbonisation.   The EU plans to accelerate energy independence with energy saving measures and increased renewables to reduce the requirement for Russian gas.  Other nations are likely to also seek energy independence and security with longer term renewables investment, particularly combined with increasingly efficient storage more attractive when there is a national security benefit on top of the environmental considerations. Nuclear is likely to be considered by many as well. Those unconcerned with the providence of gas can lower their coal dependency by purchasing discounted Russian gas to also reduce their emissions (e.g. China).