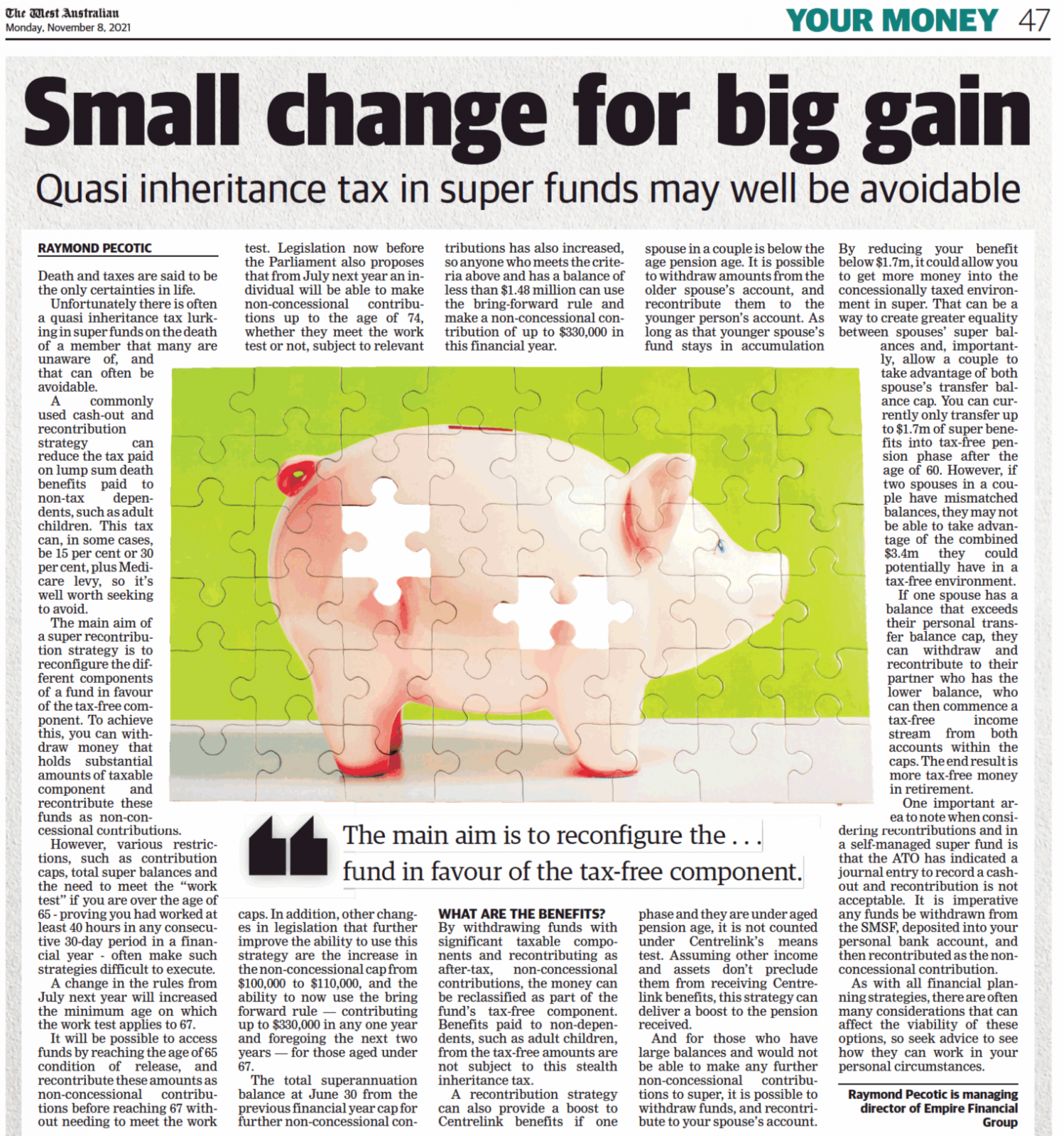 This article was first published in The West Australian, Your Money, 8 November 2021

Death and taxes are said to be the only certainties in life. Unfortunately there is often a quasi inheritance tax lurking in super upon the death of a member that many are unaware of, and that is often avoidable.

A commonly used cash out and recontribution strategy can reduce the tax paid on lump sum death benefits paid to non-tax dependents, such as adult children. This tax could be 15% or 30% plus Medicare levy in some cases, and well worth seeking to avoid if possible.

To achieve this, you can withdraw money from your super fund that holds substantial amounts of taxable component, and recontribute these funds as non-concessional contributions.

However, various restrictions, such as contribution caps, total super balances and the requirement to meet the “work test” if you were over the age of 65 (proving you had worked at least 40 hours in any consecutive 30 day period in a financial year) often made such strategies difficult to execute.

However, a change in the rules from 1 July 2020, has increased the minimum age where the work test applies to age 67. Therefore it is now possible to access funds by reaching age 65 condition of release, and recontribute these amounts as non-concessional contributions prior to reaching age 67 without needing to meet the work test. Legislation before the Parliament proposed at the last Federal Budget also proposes that from 1 July 2022 an individual will be able to make non-concessional contributions up to the age of 74 whether they meet the work test or not, subject to relevant caps.

In addition to this, other changes in legislation that further improve the ability to utilise this strategy are the increase in the non-concessional cap from $100 000 to $110 000, and the ability to now use the bring forward rule (that is contributing up to $330 000 in any one year and foregoing the next two years) for those under 67.

The total superannuation balance at 30 June from the previous financial year cap for further non-concessional contributions has also increased, so that anyone who meets the criteria above and has a balance of less than $1.48m as at 30 June 2021 can utilise the bring forward rule and make a non-concessional contribution of up to $330 000 in this current financial year.

So what does all this mean, and what are the benefits?

First and most commonly, this strategy can reduce or potentially eliminate any tax payable on lump sum benefits from your super to non-tax dependent beneficiaries, most often your adult children. By withdrawing funds from super with significant taxable components and recontributing as after tax, non-concessional contributions, the funds can be reclassified as part of the fund’s Tax Free component. Benefits paid to non-dependents from the tax free amounts are not subject to this stealth inheritance tax.

A recontribution strategy can also provide a boost to Centrelink benefits if one spouse in a couple is below the aged pension age. It is possible to withdraw amounts from the older spouse’s account, and recontribute them to the younger person’s account. As long as that younger spouse’s fund stays in accumulation phase and they are under aged pension age, it is not counted under the means test with Centrelink. Assuming other income and assets don’t preclude them from receiving Centrelink benefits, this strategy can deliver a boost to the aged pension amount received.

And for those who have large balances and would therefore not be able to make any further non-concessional contributions to super, it is possible to withdraw funds, and recontribute to your spouse’s account. By reducing your benefit below $1.7m, it could allow you to get more money into the concessionally taxed environment in super.

In addition to getting more funds into a concessionally taxed environment, this can be a method of creating greater equality between spouses superannuation balances, and very importantly, allow a couple to take advantage of both spouse’s transfer balance cap.

You can currently only transfer up to $1.7m of superannuation benefits into tax free pension phase after the age of 60. However, if two spouses in a couple have mismatched balances, they may not be able to take advantage of the combined $3.4m they could potentially have in a tax free environment. If one spouse has a balance that exceeds their personal transfer balance cap, they can withdraw and recontribute to their partner who has the lower balance, who can then commence a tax free income stream from both accounts within the caps. The end result is more tax free money in retirement.

One important area to note when considering recontributions and in an SMSF is that the ATO has indicated that a journal entry to record a cash out and recontribution is not acceptable. It is imperative that any funds be withdrawn from the SMSF, deposited into your personal bank account, and then recontributed as the non-concessional contribution.

As with all financial planning strategies, there are often many considerations that can affect the viability of these options, so it is important to seek the right advice to determine how they can work in your personal circumstances.