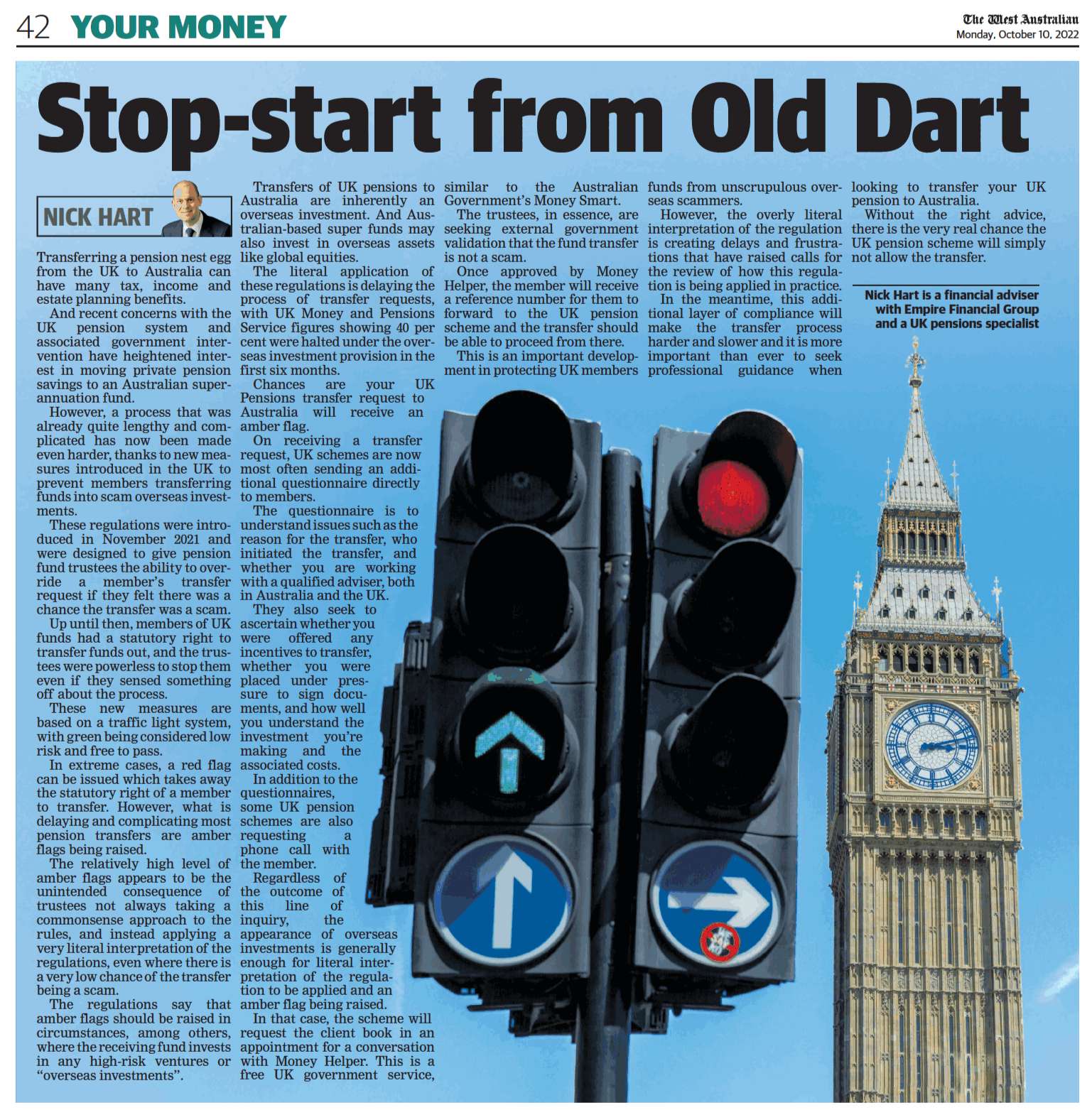 This article was written by Nick Hart, Financial Advisor and UK Pensions specialist at Empire Financial Group, and appeared in The West Australian, Your Money, on 10 October 2022.

Transferring a private pension nest-egg from the UK to Australia can have many tax, income and estate planning benefits.

And recent concerns with the UK pension system and associated government intervention have heightened interest of late in moving private pension savings to an Australian superannuation fund.

However, a process that was already quite lengthy and complicated has now been made even harder, thanks to new measures introduced in the UK to prevent members transferring funds into scam overseas investments.

These regulations were introduced in November 2021 and were designed to give pension fund trustees the ability to override a members transfer request if they felt there was a good chance the transfer was a scam.

Up until then, members of UK funds had a statutory right to transfer funds out, and the trustees were powerless to stop them even if they sensed something off about the process.

These new measures are based on a traffic light system, with green being considered low risk and free to pass. In extreme cases a red flag can be issued which takes away the statutory right of a member to transfer.

However, what is delaying and complicating most pension transfers are amber flags being raised.

The relatively high level of amber flags appears to be the unintended consequence of trustees not always taking a common sense approach to the rules, and instead applying a very literal interpretation of the regulations, even where there is a very low chance of the transfer being a scam.

The regulations say that amber flags should be raised in circumstances, amongst others, where the receiving fund invests in high risk ventures or any “overseas investments”.

Transfers of UK pensions to Australia are inherently an overseas investment . And Australian-based super funds may also investor in overseas assets like global equities.

Chances are your UK Pensions transfer request to Australia will receive an amber flag.

Upon receiving a transfer request, UK schemes are now most often sending an additional questionnaire directly to members.

The questionnaire is to understand issues such as the reason for the transfer, who initiated the transfer and whether you are working with a qualified adviser, both in Australia and the UK.

They also seek to ascertain whether you were offered any incentives to transfer, whether you were placed under pressure to sign documents and how well you understand the investment you’re making and the associated costs

In addition to the questionnaires, some UK pension schemes are also requesting a phone call with the member.

Regardless of the outcome of this line of enquiry, the appearance of overseas investments is generally enough for literal interpretation of the regulation to be applied and an amber flag being raised.

In that case, the scheme will request the client book in an appointment for a conversation with Money Helper. This is a free UK government service, similar to the Australian government’s Money Smart.

The trustees in essence are seeking external government validation that the fund transfer is not a scam.

Once approved by Money Helper, the member will receive a reference number for them to forward to the UK pension scheme and the transfer should be able to proceed from there.

This is an important development in protecting UK members funds from unscrupulous overseas scammers. However the overly literal interpretation of the regulation is creating delays and frustrations that has raised calls for the review of how this regulation is being applied in practice.

In the meantime, this additional layer of compliance will make the transfer process harder and slower and it is more important than ever to seek professional guidance when looking to transfer your UK pension to Australia.

Without the right advice, there is the very real chance the UK pension scheme will simply not allow the transfer to proceed.