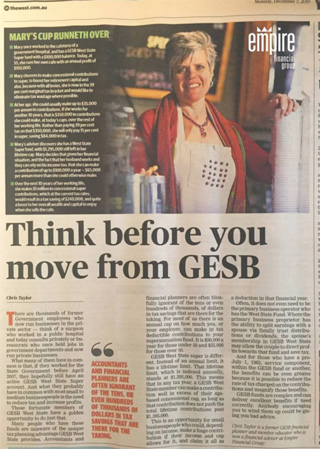 Published in the West Australian on Dec 7th 2015

There are thousands of former Government employees who now run businesses in the private sector – think of a surgeon who worked in a public hospital and today consults privately or bureaucrats who once held jobs in government departments and now run private businesses.

What many of them have in common is that, if they worked for the State Government before April 2007, they hopefully still have an active GESB West State Super account. And what they probably have in common with most small to medium business people is the need to reduce tax and increase profits.

Those fortunate members of GESB West State have a golden opportunity to do just that.

Many people who have these funds are unaware of the unique tax planning advantage GESB West State provides. Accountants and financial planners are often bliss-fully ignorant of the tens or even hundreds of thousands, of dollars in tax savings that are there for the taking. For most of us there is an annual cap on how much you, or your employer, can make in tax deductible contributions to your superannuation hind. It is $530,000 a year for those under 50 and $535,000 for those over 50.

This is an opportunity for small business people who could, depending on income, make a huge contribution if their income and cap allows for it, and claim it all as a deduction in that financial year.

And for those who have a pre-July 1, 1983, service component, within the GESB fund or another, the benefits can be even greater because it is possible to reduce the rate of tax charged on the contributions and magnify those benefits.

GESB funds are complex and can deliver excellent benefits if used correctly. Anybody encouraging you to wind them up could be giving you bad advice.

Chris Taylor is a former GESB financial planner and member educator who is now a financial adviser at Empire Financial Group.