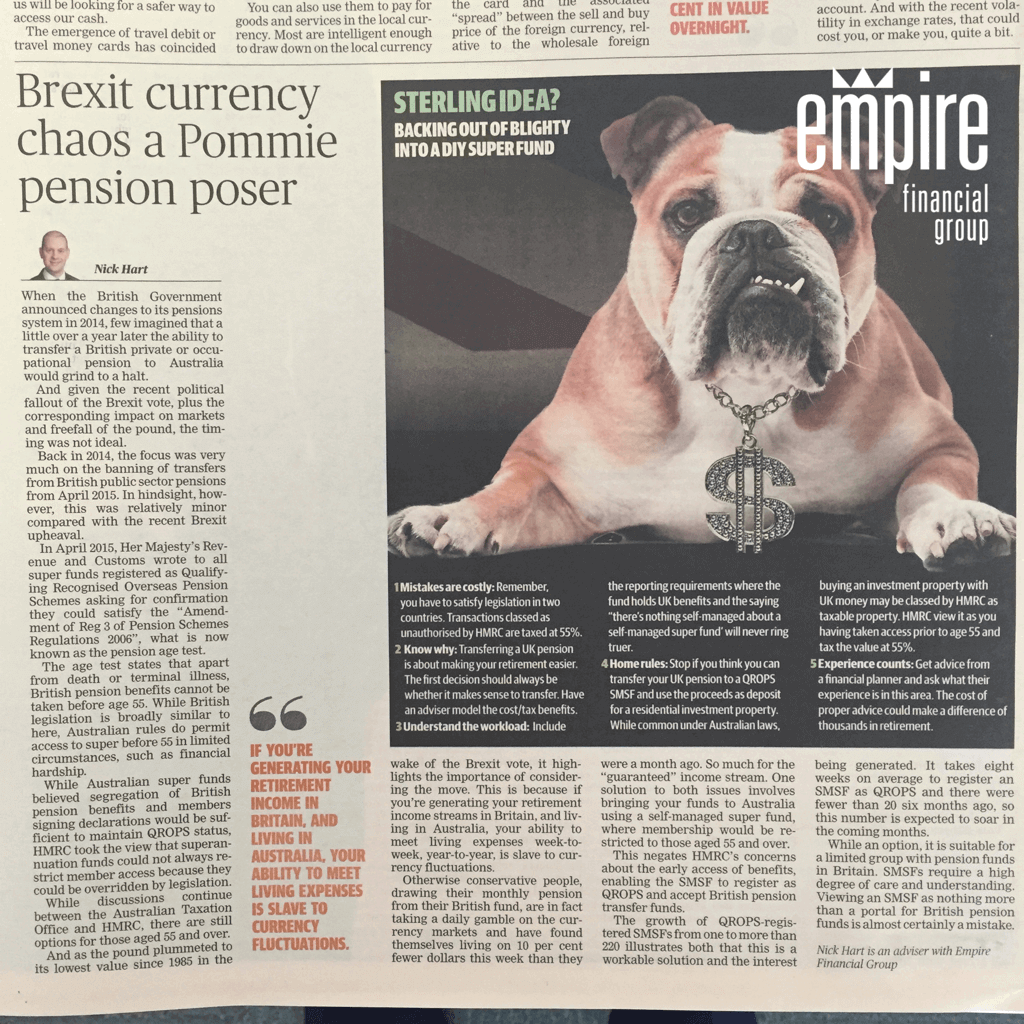 When the British Government announced changes to the UK pensions system in 2014, few imagined that a little over a year later the ability to transfer a British private or occupational pension scheme to Australia would grind to a halt. And given the recent political fallout of the Brexit vote, plus the corresponding impact on markets and freefall of the pound, the timing was not ideal.

Back in 2014, the focus was very much on the banning of transfers from UK public sector pensions from April 2015. In hindsight, however, this was relatively minor compared with the recent Brexit upheaval.

In April 2015, Her Majesties Revenue and Customs (HMRC) wrote to all super funds registered as Qualifying Recognised Overseas Pension Schemes (QROPS) asking for confirmation they could satisfy the “Amendment of Reg 3 of Pension Schemes Regulations 2006”, what has since become known as the pension age test. The age test states that apart from death or terminal illness, British pension benefits cannot be taken before age 55.

While UK legislation is broadly similar to here, Australian rules do permit access to super before 55 in limited circumstances, such as financial hardship. While Australian super funds believed segregation of British pension benefits and members signing declarations would be sufficient to maintain QROPS status, HMRC took the view that superannuation funds could not always restrict member access because they could be overridden by legislation.

While discussions continue between the Australian Taxation Office and HMRC, there are still options for those aged 55 and over.

And as the pound plummeted to its lowest value since 1985 in the wake of the Brexit vote last week, it highlights the importance of considering the move.

This is because if you’re generating your retirement income streams in the UK, and living in Australia, your ability to meet living expenses week-to-week, year-to-year, is slave to currency fluctuations. Otherwise conservative people, drawing their monthly pension from their British fund, are in fact taking a daily gamble on the currency markets and have found themselves living on 10 per cent fewer dollars this week than they were a month ago.

So much for the “guaranteed” income stream.

One solution to both these issues involves bringing your funds to Australia using a self-managed super fund, where membership would be restricted to those aged 55 and over. This negates HMRC’s concerns about the early access of benefits, enabling the SMSF to register as QROPS and accept UK pension transfer funds.

The growth of QROPS-registered SMSFs from one to over 220 illustrates both that this is a workable solution and the interest being generated. It takes eight weeks on average to register an SMSF as QROPS and there were fewer than 20 six months ago, so this number is expected to soar in the coming months. While an option, it is suitable for a limited group with pension funds in the UK. SMSFs require a high degree of care and understanding. Viewing an SMSF as nothing more than a portal for UK pension funds is almost certainly a mistake.

Having had dealt with both UK transfer and SMSF’s for many years, before you rush to set up an SMSF and have it QROPS registered, consider our top five tips:

1.     Remember, you have to satisfy legislation in two countries. Getting it wrong will involve taxation charges from either or both jurisdictions. An SMSF ruled as non-complaint has devastating tax consequences, with transactions classed as unauthorised by HMRC taxed at 55%. Mistakes, however well meaning, can be costly.

2.      Be clear why you are transferring in the first place. Transferring a UK pension is about making your retirement easier and more comfortable. The first decision should always be whether it makes sense to transfer. Have an adviser financially model the benefit in retirement after taking account of cost and tax. If the benefit is marginal, discuss your options.

4.      Stop if you think you can transfer your UK pension to a QROPS SMSF and use the proceeds as deposit for a residential investment property. While perfectly legitimate and common under Australian laws, buying an investment property with UK money may be classed by HMRC as Taxable Property. Effectively HMRC view it as you having taken access prior to age 55 and tax the value at 55%.

5.      Get advice from a financial planner and ask what their experience is in this area. Experience in both areas is a necessity, as is the ability to discuss options with you. The cost of proper advice could make a difference of thousands in retirement.

6.    In most cases, the majority of a transfer of funds from a UK pension constitutes a non-concessional contribution. The recent Federal budget announcement caps these to a lifetime amount of $500 000, calculated back to 1 July 2007.  Ensure you have a firm understanding of these limits and how they impact your circumstances to avoid penalty tax in Australia.