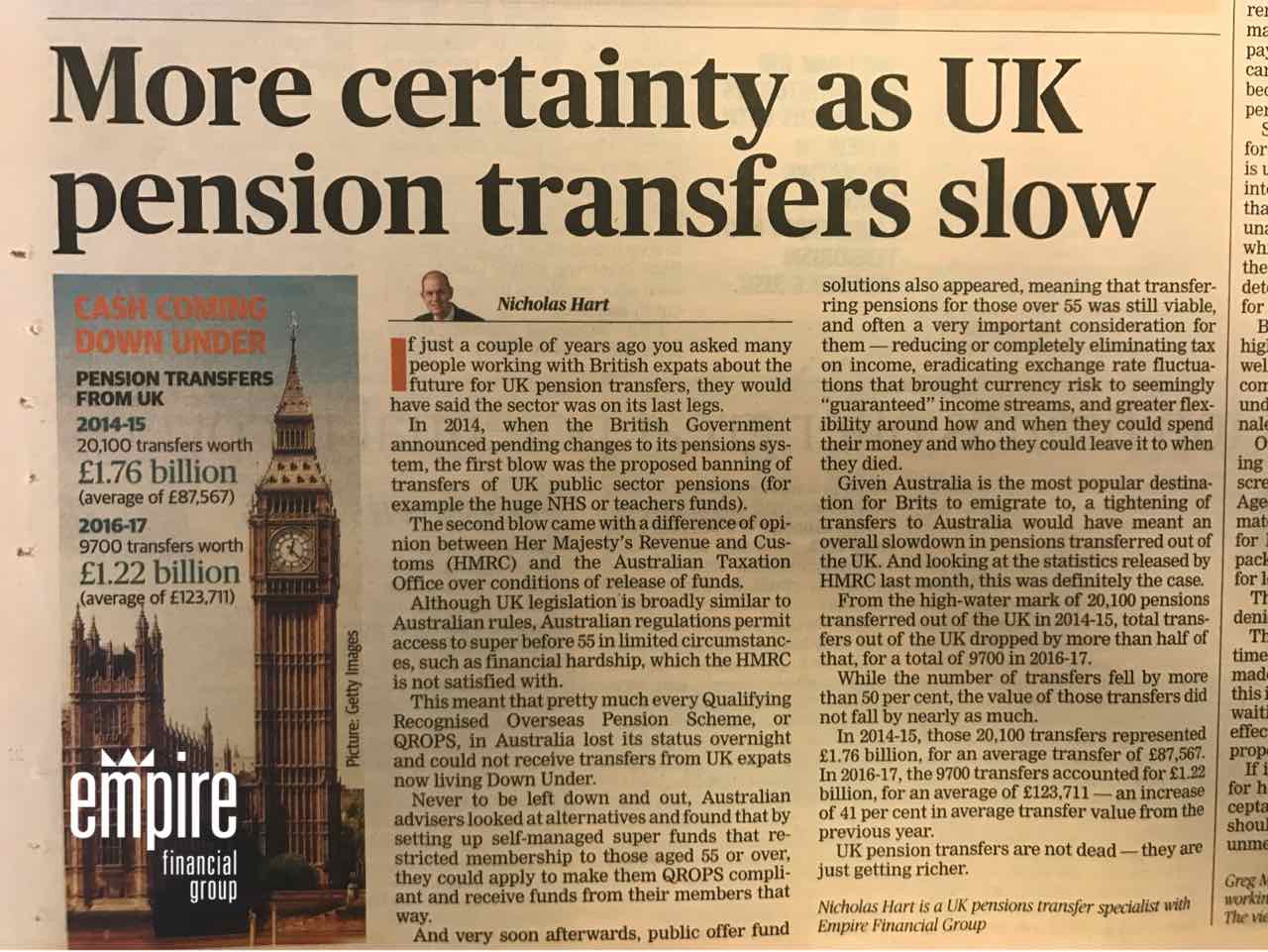 (published in The West Australian, Your Money section on 14 August 2017 as “More certainty as UK Pension Transfers Slow)

If just a couple of years ago you asked many people working with UK expats about the future for UK Pension transfers, they would have said the sector was on its last legs.

In 2014 when the British Government announced pending changes to their pensions system, the first blow was the proposed banning of transfers of UK public sector pensions (for example the huge NHS or Teachers funds).

The second blow came with a difference of opinion between Her Majesties Revenue and Customs (HMRC) and the Australian Tax Office (ATO) over conditions of release of funds.

Although UK legislation is broadly similar to Australian rules, Australian regulations do permit access to super before 55 in limited circumstances, such as financial hardship, which HMRC is not satisfied with. This meant that pretty much every QROPS (Qualified Recognised Overseas Pension Scheme) in Australia lost its status overnight and could not receive transfers from UK expats now living Down Under.

Never to be left down and out, Australian advisers looked at alternatives, and found that by setting up Self Managed Super Funds that restricted membership to those aged 55 or over, they could apply to make them QROPS compliant and receive funds from their members that way.
And very soon afterwards, public offer fund solutions also appeared, meaning that transferring pensions for those over 55 was still viable, and often a very important consideration for them – reducing or completely eliminating tax on income, eradicating exchange rate fluctuations that brought currency risk to seemingly “guaranteed” income streams, and greater flexibility around how and when they could spend their money and who they could leave it to when they died.

Given Australia is the most popular destination for Brits to emigrate to, a tightening of transfers to Australia would have meant an overall slow down in Pensions transferred out of the UK.

And looking at the statistics released by HM Revenue and Customs last month, this was definitely the case.

What is interesting though, is that while the number of transfers dropped by almost 50%, the value of those transfers did not fall by nearly as much.

What this tells us is that UK Pension transfers are not dead – they are just getting richer.

And when the average UK balance transferred equates to around $200 000, can those UK emigrants now living in Australia afford to not take what they do with those funds seriously?