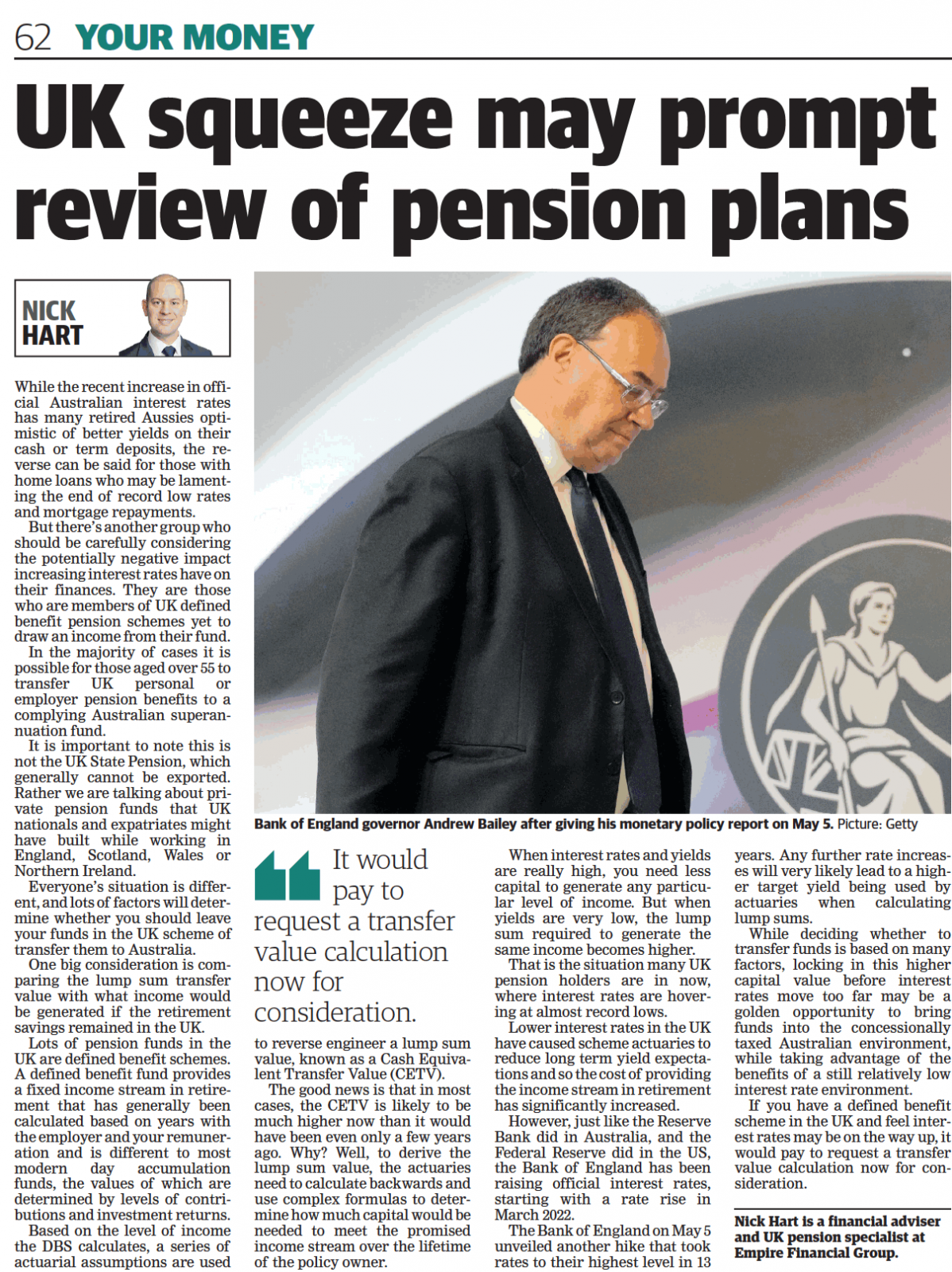 This article is by Nick Hart, Financial Advisor and UK Pensions Specialist at Empire Financial Group and was first published in The West Australian, Your Money, on 16 May 2022

While the recent increase in official Australian interest rates has many retired Aussies optimistic of better yields on their cash or term deposits, the reverse can be said for those with home loans who may be lamenting the end of record low rates and mortgage repayments.

But there’s another group who should be carefully considering the potentially negative impact increasing interest rates have on their finances. They are those who are members of UK defined benefit pension schemes yet to draw an income from their fund.

In the majority of cases it is possible for those aged over 55 to transfer UK personal or employer pension benefits to a complying Australian superannuation fund.

It is important to note this is not the UK State Pension, which generally cannot be exported. Rather we are talking about private pension funds that UK nationals and expatriates might have built while working in England, Scotland, Wales or Northern Ireland.

Everyone’s situation is different, and lots of factors will determine whether you should leave your funds in the UK scheme of transfer them to Australia.

One big consideration is comparing the lump sum transfer value with what income would be generated if the retirement savings remained in the UK.

Lots of pension funds in the UK are defined benefit schemes. A defined benefit fund provides a fixed income stream in retirement that has generally been calculated based on years with the employer and your remuneration and is different to most modern day accumulation funds, the values of which are determined by levels of contributions and investment returns.

Based on the level of income the DBS calculates, a series of actuarial assumptions are used to reverse engineer a lump sum value, known as a Cash Equivalent Transfer Value (CETV).

The good news is that in most cases, the CETV is likely to be much higher now than it would have been even only a few years ago. Why? Well, to derive the lump sum value, the actuaries need to calculate backwards and use complex formulas to determine how much capital would be needed to meet the promised income stream over the lifetime of the policy owner.

When interest rates and yields are really high, you need less capital to generate any particular level of income. But when yields are very low, the lump sum required to generate the same income becomes higher.

That is the situation many UK pension holders are in now, where interest rates are hovering at almost record lows.

Lower interest rates in the UK have caused scheme actuaries to reduce long term yield expectations and so the cost of providing the income stream in retirement has significantly increased.

However, just like the Reserve Bank did in Australia, and the Federal Reserve did in the US, the Bank of England has been raising official interest rates, starting with a rate rise in March 2022.

The Bank of England on May 5 unveiled another hike that took rates to their highest level in 13 years. Any further rate increases will very likely lead to a higher target yield being used by actuaries when calculating lump sums.

While deciding whether to transfer funds is based on many factors, locking in this higher capital value before interest rates move too far may be a golden opportunity to bring funds into the concessionally taxed Australian environment, while taking advantage of the benefits of a still relatively low interest rate environment.

If you have a defined benefit scheme in the UK and feel interest rates may be on the way up, it would pay to request a transfer value calculation now for consideration.