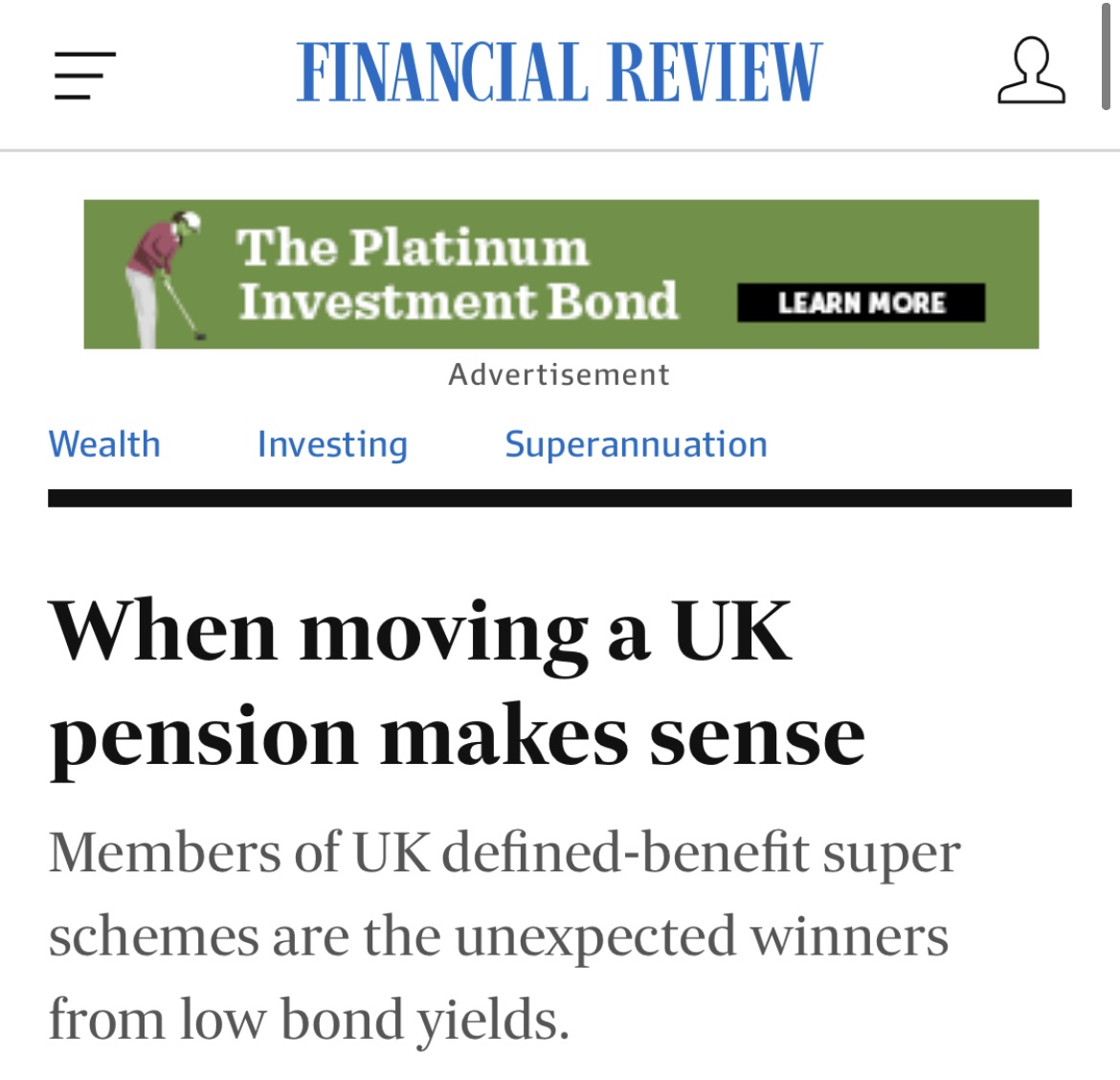 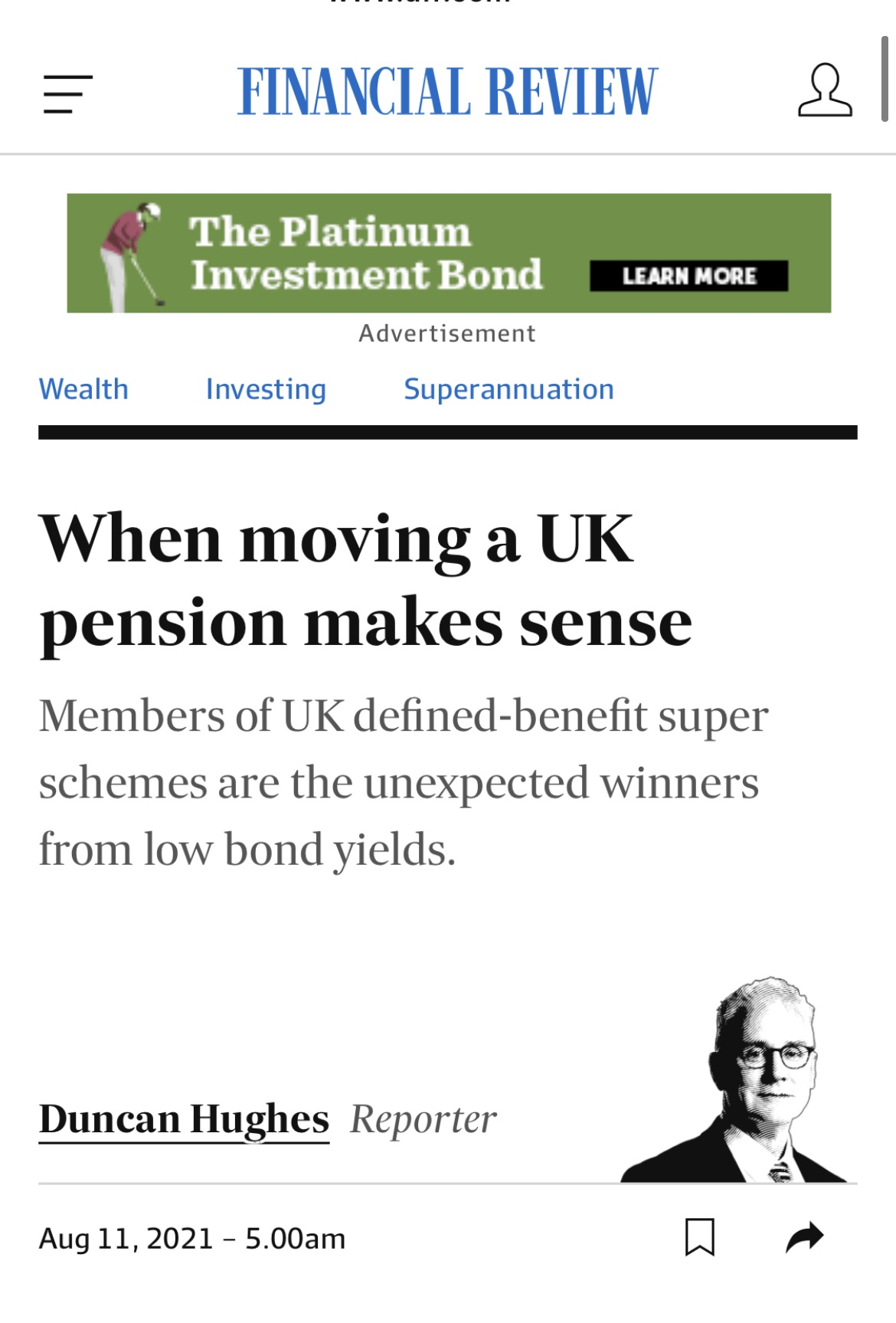 Dismal returns on deposits and bonds continue to haunt retirees, but there could be a silver lining for some UK defined-benefit super scheme members who now live permanently in Australia.

Seek expert advice before making a decision, warns Jemma Sanderson, a director at Cooper Partners. Low yields on bonds needed to fund a guaranteed pension in the UK have inflated the transfer value for those switching into Australian accumulation schemes, where the balance depends on personal and employer contributions plus investment returns.

But there are real risks attached to changing schemes, including the loss of a stable income stream and falling victim to scams. Anyone considering a switch needs to seek expert independent advice and be aware that the UK authorities have introduced safeguards to reduce the risk of commission-driven scams.

The decision to switch depends on individual circumstances, such as the size of the pension, income needs, and an appetite for increased risk, says Nicholas Hart, a financial adviser for Empire Financial Group.

“What are you trying to achieve?” Hart asks. “You might be someone who gets a small income stream upon retirement but would prefer to get the money over here to pay off a whopping mortgage. It comes down to the individual’s goals.”

Defined-benefit schemes have unique features, such as a guaranteed income based on a member’s final average salary and independent of investment performance, with all investment risk resting with the employer or fund. “Low interest rates in the UK have caused scheme actuaries to reduce long-term yield expectations and therefore the cost of providing the income stream in retirement has significantly increased,” Hart says. “This has caused an uplift in transfer values.”

A transfer value is the amount a super scheme will offer for transferring out of a defined-benefit scheme.

Hart gave some case studies showing the difference in transfer values for two Britons who migrated to Australia at different times after 18 years of employment with the same amount in defined-benefit schemes.

The first received a transfer value in 2009 of about $199,000. The alternative was an annual pension of about $11,000, or a yield of about 5.4 per cent. At that time, deposit accounts at Australian banks were paying about 6 per cent.

Why it’s worth playing the long investment game

Actuaries need to work backwards to calculate a lump sum. “The actuaries use complex formulas to determine how much capital would be required to meet the promised income stream over the lifetime of the policy owner,” says Hart.

“The cost of the pension scheme providing a lump sum is high.”

Andrew Boal, a partner with Deloitte Consulting specialising in super, says the costs of running defined-benefit company schemes have caused managers all over the world to consider closing them down.

Furthermore, most people coming into the workforce are expected to have between five and seven jobs over their working life, which means employees and bosses prefer the flexibility of accumulation schemes.

Under UK law, it is possible for those aged over 55 to transfer UK personal or employer pension benefits to a complying Australian superannuation fund. This only applies to pension funds and not the UK state pension.

Defined-benefit schemes provide a guaranteed income for life usually based on a rate set by the employer, such as a percentage of final salary based on the number of years of membership.

The downside of relinquishing a defined benefit is uncertain income because an employer is no longer obliged to pay guaranteed income in full. Many defined benefit schemes also provide income payments to dependants after the death of the scheme member, which is usually limited to a spouse and not children. There is generally no capital value that will pass to the estate upon the death of both the original pensioner and their spouse.

In contrast, an accumulation, or defined contribution, scheme is based on market returns and not guaranteed. Money paid into the scheme is typically invested in equities and other asset classes with the aim of building a retirement nest egg. But its value can rise and fall depending upon market conditions and there is the risk that investors will get less than they put in. That means a defined contribution member will need to make investment decisions, which means additional risks, including the possibility of assets running out.

Why it’s easier for borrowers to be green
Those considering a transfer need to ask their scheme administrator to calculate the cash equivalent transfer value. The scheme is expected to provide a “statement of entitlement” within three months that sets out the transfer value, details of the benefits accumulated in the scheme and information the new scheme will need to proceed with the transfer.

Transfer values are guaranteed for three months, UK super authorities say. Those transferring more than £30,000 ($57,000) will also need to provide evidence that they have sought advice from a UK-regulated financial adviser about the transfer.

UK authorities warn about an increase in scammers encouraging super transfers, typically into offshore accounts with high management fees and opaque investment offerings. “It is not always easy to spot a scam as there are an array of different and often sophisticated techniques,” a recent UK parliamentary report concluded.

Duncan Hughes is a Walkley award-winning personal finance reporter, based in our Melbourne newsroom. Connect with Duncan on Twitter. Email Duncan at duhughes@afr.com.au