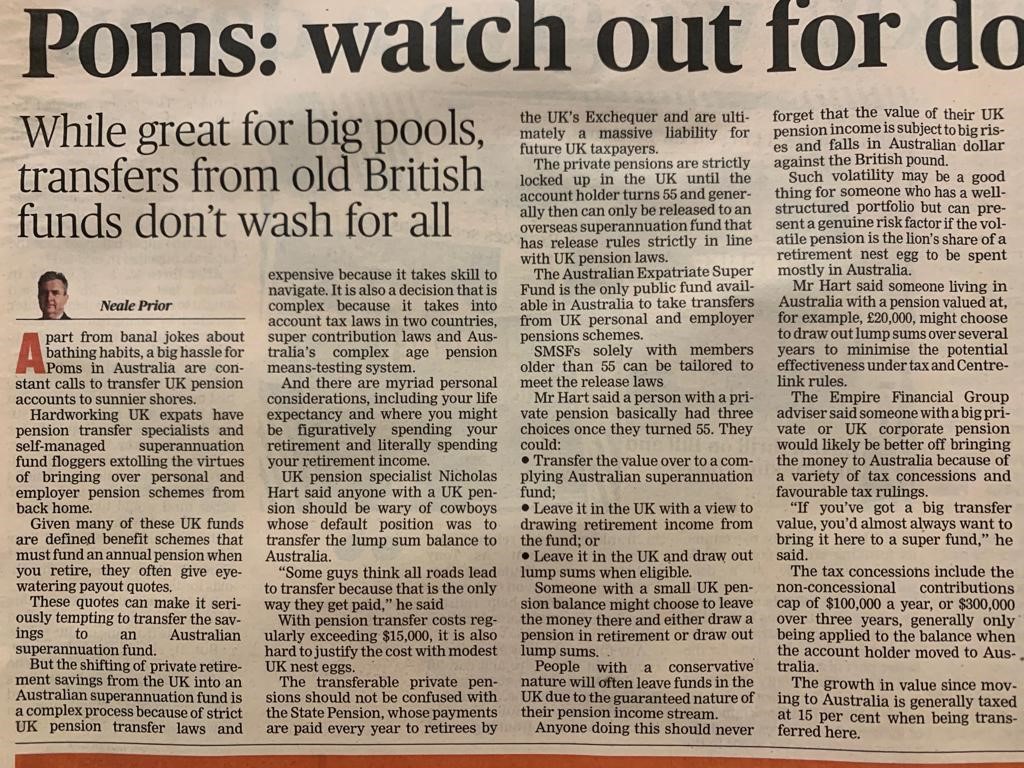 Apart from banal jokes about bathing habits, a big peril for Poms in Australia is constant pressure to transfer UK pension accounts to sunnier shores.

Given many of these UK funds are defined benefit schemes that must fund an annual pension when you retire, they often given eye-watering payout quotes.

These quotes can make it seriously tempting to transfer the savings to an Australian superannuation fund.

But the shifting of private retirement savings from the UK into an Australian superannuation fund is a complex process because of strict UK pension transfer laws and expensive because it takes skill to navigate. It is also a decision that is complex because it takes into account tax laws in two countries, super contribution laws and Australia’s complex age pension mean testing system.

UK pension specialist Nicholas Hart said anyone with a UK pension should be wary of cowboys whose default position was to transfer the lump sum balance to Australia.

“Some guys think all roads lead to transfer because that is the only way they get paid,” he said

With pension transfer costs regularly exceeding $15,000, it is also hard to justify the cost with modest UK nest-eggs.

The transferable private pensions should not be confused with the State Pension, whose payments are paid every year to retirees by the UK’s Exchequer and are ultimately a massive liability for future UK taxpayers.

The private pensions are strictly locked up in the UK until the account holder turns 55 and generally then can only be released to an overseas superannuation fund that has release rules strictly in line with UK pension laws.

The Australian Expatriate Super Fund is the only public one fund available in Australia to take transfers from UK personal and employer pensions schemes.

Mr Hart said a person with a private pension basically had three choices once they turned 55. They could:

Someone with a small UK pension balance might choose to leave the money there and either draw a pension in retirement or draw out lump sums.

People with a conservative nature will often leave funds in the UK due to the guaranteed nature of their pension income stream.

Anyone doing this should never forget that the value of their UK pension income is subject to big rises and falls in the Australian dollar against the British pound.

Such volatility may be a good thing for someone who has a well-structured portfolio but can present a genuine risk factor if the volatile pension is the lion’s share of a retirement nest egg to be spent mostly in Australia.

Mr Hart said someone living in Australia with a pension valued at, for example, £20,000 might choose to draw out lump sums over several years to minimise the potential effectiveness under tax and Centrelink rules.

The Empire Financial Group adviser said someone with a big private or UK corporate pension would likely be better off bringing the money to Australia because of a variety of tax concessions and favourable tax rulings.

“If you’ve got a big transfer value, you’d almost always want to bring it here to a super fund,” he said.

The tax concessions include the non-concessional contributions cap of $100,000 a year, or $300,000 over three years, generally only being applied to the balance when the account holder moved to Australia.

The growth in value since moving to Australia is generally taxed at 15 per cent when being transferred here.