Empire Financial Group > Blog > Featured > Is there a postive side to negative gearing? 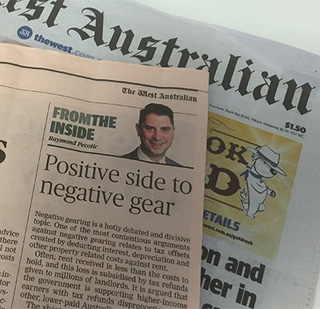 Negative gearing is a hotly debated and divisive topic. One of the most contentious arguments against negative gearing relates to tax offsets created by deducting interest, depreciation and other property related costs against rent.
Often, rent received is less than the costs to hold, and this loss is subsidised by tax refunds given to millions of landlords. It is argued that the government is supporting higher income earners with tax refunds disproportionate to other, lower-paid Australians.

The short-term Budget drain is not in question. However, detractors of this strategy are ignoring the positive effects on the economy and longer-term revenue flows — capital gains tax from property sales and independently funded retirees claiming less age pension.

Let’s assume this investment property is rented at $430 per week (a 4.5 per cent gross yield) and we apply a reasonable amount for property management costs, depreciation, council rates, water rates, land tax and insurance.

In total, the calculations show that tax refunds received would be about $75,000.

The value of that property, at the very modest capital growth rate, would be $900,000 after 15 years. When you consider stamp duty (which increases cost base) and deprecation claimed (which reduces the cost base) the capital gain by that time is approximately $425,000.

If we assume that capital gains are calculated as they are now (on half the gain) that becomes an assessable capital gain of $212,500. If we assume half of the income falls in either of the top two marginal tax rates, we can figure at today’s rates, an average tax payable of 44 per cent. The tax due upon the sale of the property would be approximately $93, 500.

Not only is the entire sum of tax refunds paid out over the years to the landlord received back by the government in the form of capital gains tax, but there is even $18,500 left over.

Furthermore, let’s not forget that the investor paid around $17,000 to the State Government in stamp duty when the property was purchased, as well as land tax over the 15 years. And then there are less obvious taxes like GST on the property management fees.

This is a very straightforward calculation intended for illustration purposes only and doesn’t take into account myriad ther variables that all property investors should be aware of. But it does demonstrate a broad outline of a potentially positive overall revenue position for the government. The real problem with negative gearing comes when the property is held for shorter terms, and the capital gain, and therefore the tax paid on it, is not enough to cover the negative gearing refunds paid out. Then not only does the taxpaying public lose out, but so too does the individual whose investment returns little or no gain.

Perhaps, the discussion should turn to ways and incentives to promote longer-term ownership, to increase the chance that future capital gains tax cover the amount of negative geared refunds paid.

Maybe the capital gains discounts become offered after a longer term than they are now?

If long-term investors can become tax positive for the government, which by extension precludes them from any, or reduced Centrelink benefits, then the argument to support and partner with these investors in the early years with tax concessions certainly becomes more compelling.’