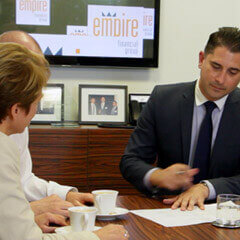 A long-standing client couple came in for their annual review. They had been diligently paying off their home loan and contributing to super, and were now in a position where in their late 30’s, had their home almost paid off and around $300 000 in combined super balances.

They were at a cross roads. He wanted to buy an investment property. She wanted to upgrade their family home for their growing kids. Neither of them was comfortable enough with debt to commit to both.

We had a solution.

Based on their combined income, they had around $15 000 per annum going into super. Looking at their budget, with the extra debt for the larger family home, and working on having that paid off in 10 years time, we could still find around another $100 per week in their budget.

$100 per week after tax money was $164 per week which we salary sacrificed. This increased their total contributions to super to $23 500 while saving them over $2000 in tax.

Setting up an SMSF, we used $250 000 of their super balance as a deposit on a $480 000 property purchase. The remaining $50 000 we invested in other areas for liquidity and diversification.

It meant that we could have that investment property paid off in around 7 – 8 years, and they could pay off their additional family home loan shortly afterwards.

They both got what they wanted without overextending themselves, and in addition to a bigger and better family home, they’ve got a nice future development site sitting there to assist in funding their retirement.

get your super benefits